It’s an old parlor game: compare Babe Ruth to Barry Bonds, or Lou Gehrig to Albert Pujols. We can calculate that the older players were generally greater than their peers in a way that modern greats are not; but the Baseball Rabbi, Pesach Wolicki, offers a new way of viewing the entire question which demonstrates that today’s players are the best in the history of the game. (Even Johnny Unitas and Julius Erving come up in this discussion…) In addition, Pesach and Scott Kahn analyze the unfair tragedy of the Twins, and derive lessons in team building from, of all teams, the 2003 Detroit Tigers. 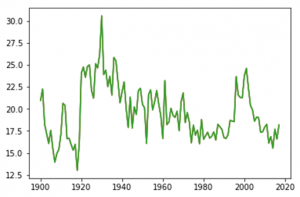 The above chart shows standard deviation of regulars (i.e. players who qualify for the batting title) for runs created per season. Credit: Moshe Schorr 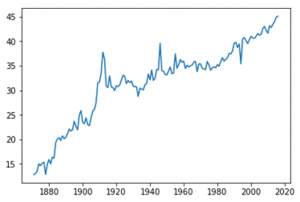 The above chart shows the number of players appearing per team per season over the course of history. Simply, total players who make even one appearance every season divided by number of teams. Credit: Moshe Schorr

The crisis of Orthodox teachers leaving... and not coming back. (And they have good reasons, too.)

"A government that arose through blind hatred, out of evil argument not for the sake of heaven... a cursed government..."

A thread about religious Knesset members and the language they sometimes use against their opponents.

So my @Delta flight to New York was canceled, after an initial leg from Tel Aviv to Boston. I was told by an agent this morning that I would be notified about any changes by email. Nope. I found out by showing up. Not cool, Delta. (Yes cool @7News who interviewed me just now.)

All podcasters who use @SoundCloud: maybe this latest problem (the server 100% down) means that it's time to take the plunge and switch to an actual podcasting host like @libsyn. That's my plan...

Has Religious Zionism lost its way as Israel's moral voice? Listen to this fascinating interview with @YKleinHalevi to hear his take... and what can be done to help fix the problems that we face.

DEAR COFFEE DRINKERS AND OTHER HUMANS, Jewish Coffee House is a startup podcast network, which produces and broadcasts both audio and video content. (Also jokes.) We're starting off small, but we plan to expand... Read more

Join the Maimonides Minute for the re-release of our series on the Rambam’s laws of Passover. This shiur offers additional